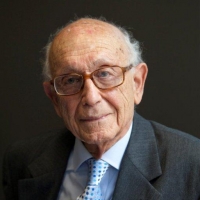 “Attendees to the Society’s November meeting were privileged to listen to Melbourne University’s Emeritus Professor Joe Isaac who gave his views on the background and current perspectives of the Industrial Relations landscape in Australia today.  Despite his octogenarian years, Professor Isaac still demonstrated a keen and insightful intellect that has obviously underpinned his long and distinguished academic career.   The Professor’s talk embraced four major areas of IR policy; the power of the trade unions, the perceived lack of flexibility in our system, its effect on productivity and areas for possible improvement.

Professor Isaacs opened his address by reminding the audience of part of the speech of Alfred Deakin to Parliament in 1904 that Australian law in this area was based on humanitarian principles and with words that are strangely still appropriate for today:

“It leaves to its opponents the creed, whose God is greed, whose devil in need and whose paradise lies in the cheapest market.”

The Professor posited in answer to the first two issues posed that unionism was declining and that the number of days lost to strikes has declined significantly since the 1970’s.  He pointed out that today there are significantly more days lost to absenteeism than strike action.

With regard to flexibility, Professor Isaac pointed out that Australia in 2006 had the second highest figures for casual employment in the OECD but the down side of this flexibility in the labour market means that it does not provide opportunity for skill formation (Editor – or  company loyalty) that is critical to productivity.  The presentation also gave two other critical facts that must contribute to Australia’s productivity dilemma; that we are above the OECD average in our % of low skilled workers, and we have a higher average of hours worked per week that other OECD countries.  (Editor – when this is considered against our cost of living which has risen significantly and is now much higher, not just against Asian competition but even against the USA and Germany today, it adds to our productivity challenge).

The Professor’s address also covered a number of questions pre-arranged from the audience and while his views on the questions posed could have been seen by some members as ‘left leaning’ he gave a reflective insight into one of the major issues of the Australian economy today as it adapts to face the global challenges of the 21st century.

Perhaps the lasting memory of Professor Isaac’s talk will be the knowledge and enthusiasm he still brings to his opinion.  He really demonstrated that wisdom should be the valued commodity of old age.”

Our speaker for November was the Emeritus Professor Joe Isaac from the Department of Management and Marketing, University of Melbourne.

Emeritus Professor Joe Isaac is a Professorial Fellow in the Department of Management, University of Melbourne, following his retirement from the Australian Conciliation and Arbitration Commission.  He was Chair of the General Insurance Claims Review Panel from 1993 to 1998.  He was invited by the ILO in May 2002 to advise on suitable research projects to be supported by the ILO in Indonesia.  He has been back with further ILO consultancies for both Indonesia and Timor Leste.  Together with Professor Stuart Macintyre, he was commissioned to edit a centenary history of the Australian Industrial Relations Commission (and its antecedents) which was published in 2004.  He continues his interest in the labour market and its institutions.