You are invited to connect at The Victorian Vernier Society monthly meeting is on Thursday the 11th of April 2019 at Kooyong Tennis Club: 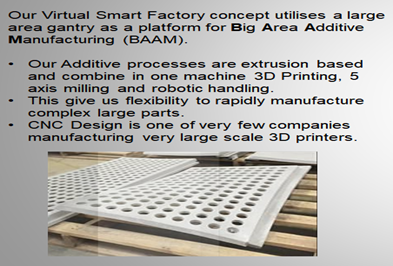 VERNIER’S APRIL SPEAKER INTO ADDITIVE IN A BIG WAY!

Vernier’s April meeting welcomed two new potential members along with the regular faces to listen to Bruce Rowley, the Managing Director of CNC Design.  The company founded in 1984 now has over 150 people based at the offices in Indonesia, NZ, Malaysia and Singapore as well as at their headquarters in Nunawading in Victoria.

CNC Design has focused on becoming a complete mechatronic solution provider to machine builders and end customers world-wide based on their skills and relationship with Siemens and Güdel.  It is in partnership with Güdel, the Swiss based company who are a worldwide provider of intelligent automation solutions and high-precision machined components that CNC Design have made a substantial investment into “Big Additive” – the large-scale manufacture and machining of non-metallic additive formed components.

Bruce explained how the company had invested heavily in developing the additive technologies for producing large components for a range of industries including theme parks, infrastructure and buildings.  The company had invested significant sums over the last few years to develop layering flows utilising concrete, polyurethane foam and wax and now even experimenting with thermoplastics that could maximise additive’s real advantage in creating non-linear moulds and pieces.  These complex shapes are becoming increasingly seen in the latest building and infrastructure such as in new stations in the London underground system.  In another project application wax moulds were able to replace the traditional wood moulds; wood mould making is a skilled and labour-intensive process and so producing moulds in wax allowed the moulds to be produced far more productively and also had the addition benefit of being able to reclaim the mould when the project was complete.  By researching and developing techniques for fast flow rates across this range of materials and using in expertise in programming and gantry machining, CNC are now one of only probably 5 companies in the world that are proficient in this niche area.  But CNC desire for research and development does not stand still and Bruce and his team are looking at further materials and applications, to open new opportunities in the aerospace industry and even more ambitiously to investigate the possibilities of robot machining.  A tall task indeed!

In the Q&A session that followed the attendees were given a further insight into Bruce’s desires to push the research envelope in this form of ‘big’ additive.  Let’s hope another Australian company can make it ‘big’ on the international stage.

Manufacturing has to step up to the educational challenge of Automation!