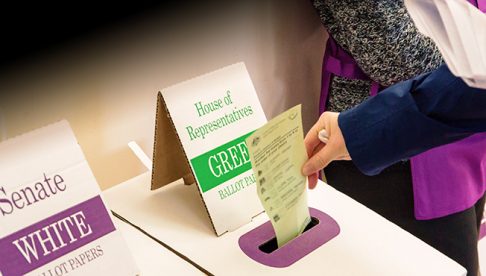 Protest politics is on the rise in Australia, and the main cause is collapsing trust in politicians and the major parties, according to Grattan Institute’s latest report, A crisis of trust: The rise of protest politics in Australia. At the 2016 federal election, votes for minor parties hit their highest level since 1949. More than one-in-four Australians voted for someone other than the LNP, ALP or Greens in the Senate, and more than one-in-eight did likewise in the House of Representatives.

If the major parties and politicians want to rebuild trust with voters, they’ll need to change the way they do politics, explain Budget Policy and Institutional Reform Program Director Danielle Wood and Associate Carmela Chivers in this podcast discussion.

It will be a slow process, write Danielle Wood, Carmela Chivers and Grattan CEO John Daley in The Conversation. Reforming political donation laws and tightening regulation of lobbying and political entitlements could help reduce the incidence of trust-sapping scandals and reassure the public that the system is working for them. Politicians should also seek to dampen rather than inflame cultural differences, by stressing the common ground between city and country and between communities with different backgrounds.

Federal Labor has announced it will abolish cash refunds when investors, such as retirees, who pay little or no tax get dividends from companies that have paid company tax. It’s not first-best comprehensive tax reform, write Danielle Wood, John Daley and Grattan Fellow Brendan Coates in The Conversation. But in the absence of that holy grail, it is a piecemeal move towards a more equitable tax system that collects enough revenue given current spending commitments.

Scott Morrison says the policy will mainly hurt low-income earners. He says that 54 per cent of people affected by Labor’s policy have taxable incomes of less than $18,200, and that 86 per cent of the value of all franking credits refunded are received by those with taxable incomes of less than $87,000 a year. But these claims are deeply misleading, write Danielle Wood and Brendan Coates in Inside Story, because taxable income ignores the largest source of income for many wealthier retirees: tax-free superannuation.

The reporting of the Labor policy and earlier policy debates around negative gearing shows how easy it is to mislead Australians about who loses from tax changes. The full range of tricks used by vested interests and political combatants to scare and confuse was on display, write Danielle Wood and Brendan Coates in The Canberra Times.