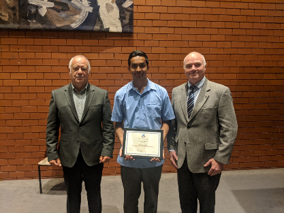 For the second year running, it was a privilege for Peter Sutton and Jack Parr of the Vernier Foundation to attend the Dandenong High School Awards Night 2019 and present the Foundation awards to 3 of the school’s outstanding STEM students!

The event was held in December at the Robert Blackwood Hall in Monash University and was packed with proud students and parents and the night was particularly pleasing as it was the culmination of celebrations for the school’s centenary “1919 -2019: A hundred years celebrating the past, present and future”!

The evening was a mix of presentations and musical and theatrical interludes, showcasing the amazing talent of some of the young people and was a compliment to the school’s professionalism, the discipline of the students and the accomplishment of the teachers.

The three Foundation awards were for individuals, chosen by their teacher, who made both an individual and a team contribution in each of the three disciplines; STEM, Robotics and Systems Engineering.  The awards were funded through donations from Sutton Tools and from individual donations of members and both Peter and I were pleased to be invited to personally present them to the winning students.

The STEM award went to Mohammad Mohsen Ali who completed 3 STEM based elective in Year 9 – STEM, IT and Graphs and Technology.  His teachers were proud of his leadership skills within the group, his perseverance and a strong understanding of the design process.

Mohsen, as he is known to his teachers, main project was the design and build of a small moving car and he believes the project gave him “a better view of how the world of STEM works “.  Mohsen says that engineering is one of his interests for the future as he always wanted to design and build his very own technology. Mohsen states “The Vernier Foundation scholarship has given great support to my family but has given me the determination and pride for my future engineering to come.  In the future I hope I take part in a computer engineering career”.

The Robotics Award went to Vaishnav Vengilat who was a key contributor in his Year 10 Robotics class.  He was an integral part in the class’s best functioning team; constructing a robot that could complete almost all of the required tasks, an impressive achievement!  His teachers also complimented Vaishnav for his academic contribution to the robotics class, contributing helpfully to the class discussions and demonstrating and admirable work ethic.

Vaishnav is seen here with his donation certificate and Vernier Foundation representatives Jack Parr and Peter Sutton of Sutton Tools.

The final recipient of the Systems Engineering Award with Adeel Jaffrey. Adeel was unfortunately not able to personally receive his award on the night but it was well deserved for the highest overall score in systems 1&2 and a consistent commitment to his mechanical project and documenting the process.  He responded to inevitable setbacks with resilience and innovation and above all the drive necessary to persist though the variety of problems that practical tasks create!

THE VERNIER FOUNDATION CONGRATULATES THE 3 WINNERS AND DANDENONG HIGH SCHOOL FOR ANOTHER FINE YEAR OF ACADEMIC ACHIEVEMENT!