You are invited to connect at The Victorian Vernier Society monthly meeting on Thursday the 8th of August at Kooyong Tennis Club:

Food service will commence at 12:15 and continue until 1:00pm when the formal presentations will commence. If you want to be fed please arrive before 1:00pm.

We hope that you will bring younger guests to interact with the 50 or so senior high school students attending. 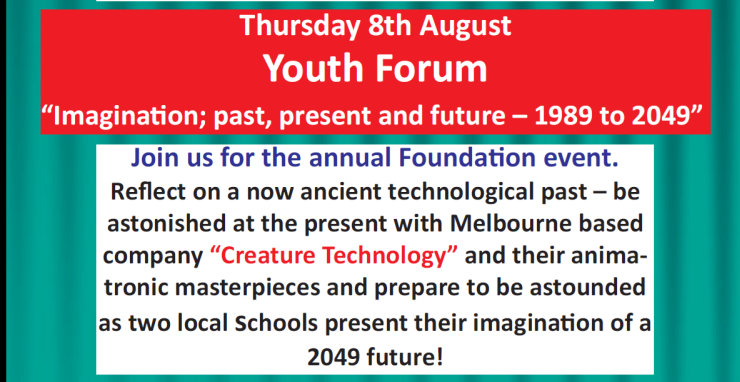 In 1977, the founder of one of the leading computer manufacturers in the world at that time DEC said “there is no reason anyone would want a computer in their home”. It seems stupid now because he had not imagined the personal computer!

Imagination past – the first Vernier Speaker will briefly set the scene for generational innovation; in 1989, there was no world wide web, mobile phones were really too heavy to carry and planets orbiting other suns were not yet been seen.  Just consider the changes over the last 30 years!

Imagination Present – Our main speaker is Creature Technology Co –a company that epitomises imagination!  Melbourne based, they first came to prominence in 2007 with “Walking with Dinosaurs” and are now one of the leading companies for producing the most technologically, sophisticated, creatively inspired and life-like animatronics for arena spectaculars, theme parks, exhibitions and stage shows around the world.  Chief Engineer Richard McKenna and his team will present a glimpse (most of how they do it is secret) into the technologies and dedication that go into producing their astounding projects and explain the whole range of skills and engineering capabilities employed to produce such spell binding pieces of technology.

Imagination Future – from the imaginers for tomorrow.  Finally, a look into an imaginative future and who best to do that but the young people from our two collaboration schools, Dandenong High and Peninsula Grammar.  Both schools will give us their own glimpse of the technologies of the future – the engineering and manufacturing innovations and inventions that will drive the world by 2049.

Richard is Chief Engineer at Creature Technology Company. He joined CTC in 2010 and has worked on all of the major projects since that time, including How to Train Your Dragon; King Kong and the Sochi Olympic Mascots.  He has a Bachelor of Engineering (Hons) in Mechatronics, Robotics and Automation Engineering from Swinburne University and is certified as a “Chartered Professional Engineer” by Engineers Australia, as well as being registered on the National Professional Engineers Register (NPER). Prior to joining CTC, the majority of Richard’s time was spent in the defence industry, and he has also worked in special effects for film and television.

Josh works closely with the Engineering team on the design of Creature Technology Company CTC’s animatronic creatures. He has a Bachelor of Engineering (Mechanical) from Swinburne University, having previously worked primarily in the heavy vehicle and mining equipment industries, involved in both the mechanical and electrical design of project-based components and structures. Josh’s passion for engineering stems far beyond work: he enjoys designing, researching and building his own mechanical and electrical projects for home as well. 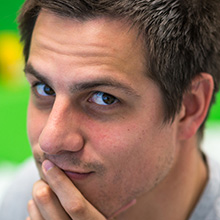