There are times today when one feels that Australian Manufacturing does not get the support it needs, so it was good as a Vernier Society member to attend Australia’s leading Manufacturing organisation, AMTIL, at their National Conference held on the 22nd of August in Hawthorn.

From my experience, there are two main ingredients to a successful conference; the first is organisation and Kim Banks and her team at AMTIL certainly delivered with a professional and well managed event.  The second is to produce a set of speakers who maintain both the theme and the enthusiasm throughout the event and again after a slow start, AMTIL delivered, with an exceptional afternoon program.

The role of the keynote speaker is a daunting task at the best of times and Michael Grogan of AMGC (Australian Manufacturing Growth Centre) task was not eased when he was asked at the last minute to fill in for his sick boss.  The conference theme was ‘Resilience’ and Michael outlined the 3 major messages of AMGC’s recent report on ‘Resilience; ‘Superiority – Diversity – Flexibility’.  AMGC’s message of what companies need to do was clear (and well spelled out in their full report) but I am always left with a feeling that organisations like AMGC do not go far enough in assisting the delivery of the ‘how’.   Victorian manufacturing seems to be focused on the ‘S’ in SME’s (it would be interesting to know AMTIL’s member profile in this regard) with owners more comfortable on the shop floor than in the board room; while the appointees to these government sponsored organisations seem to have the reverse comfort. 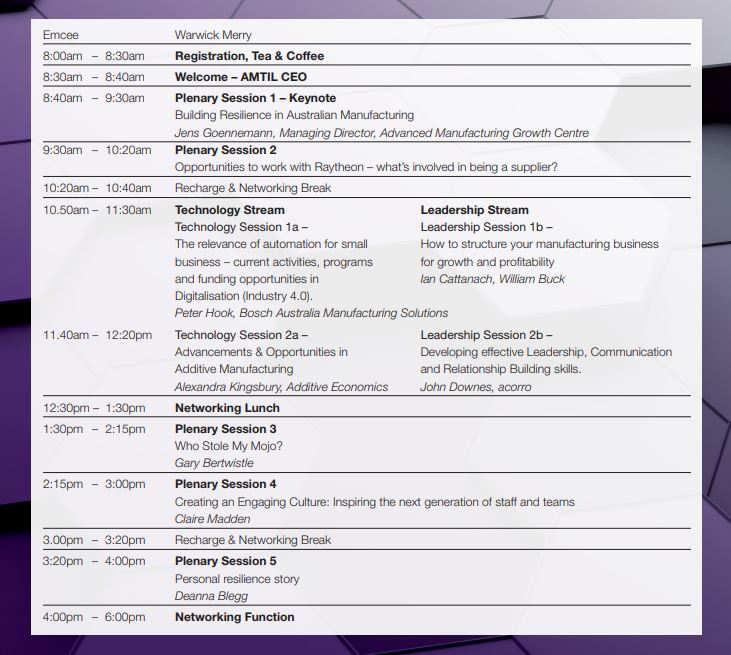 Another element of a successful conference recipe is that one can take away from each speaker a lasting taste, a little nugget of knowledge or even a new technique that one can use or repeat in their business and so here are my message picks from some of the other speakers.

Rick Shalders of IDU Raytheon outlined the opportunities for Australian companies in the American and global defence market.  It is a very tough but lucrative market to crack and Rick showed one chart of the differences in competitive and acceptance entry levels between companies that compete on niche technologies and companies that want to compete on what he called “Build to Print”.  Both routes require exhaustive processes to success but the ‘BP’ route is much more competitive and requires very high standards of continuous improvement.

Gary Birtwistle is a motivational speaker who left the audience with a vast number of messages about dreaming, thinking and delivering future success.  One phrase that stuck was “will it make the boat go faster”.  Whatever ideas one has, this question should be asked – will it really improve what we are trying to do?  The other thing he highlighted were the many motivational books and authors worth reading but one is “Legacy” – the story of the All Blacks success by James Kerr.  I can also recommend this fabulous book about the culture and spirit of the All Blacks and very pertinent to both their recent retention of the Bledisloe Cup but also one of their key characteristics is ‘humility’, something that the recent appalling, political intrigues showed was clearly missing.

Claire Madden is an author and social researcher who shared her insights on Generation Z (born after 1999) and how they appear to think and act so different to other generations and especially mine (baby boomer).  It was a well-researched and insightful presentation highlighting issues such as use of technology and new language, attention spans and career ambitions but to myself and other colleagues it created a disturbing picture of how this generation will integrate into today’s business practices.  Which will have to change and how will compromise be reached?

The final speaker was a remarkable woman.  Deanna Blegg is a world class athlete who has overcome HIV and cancer to still compete in endurance competitions that most people would never even contemplate.  There were no messages to be taken away – only astonishment and admiration!

It was a successful conference offering strong networking around breaks enjoyed by the 150 plus attendees who took the day out to attend.  It is though a disappointing fact that many of the people in Victoria’s manufacturing community seem to be so entrenched in their businesses today that attendances at such events (including Vernier) is diminishing.  Too many business people (and others) seem to feel the need to be in constant touch ‘in’ the business that they do not appreciate the value of attending such external events.  The conference message was resilience but it was also about just taking time out to think insightfully ‘on’ the future business.

Where have all the engineers gone??